Jungle Safari is an unforgettable experience in Ranthambore National Park.

Ranthambore National Park is one of the best wildlife tourist attractions in the world to see wild tiger and explore different type of wildlife in the state of Rajasthan India. Ranthambore name come from its immense FORT. Citadel lies on isolated thambore hill and surrounded by Aravali and Vindhyas mountain range. The fort came into existence in 9th century and the area around is plagued with ruins like ancient step wells, guard posts, temples and memorial stones, mosque and mausoleums, cupolas and lake palaces ,all stand witness to Ranthambhore's diverse and enthralling history.

Ranthambore was acknowledged a wildlife sanctuary in 1955 and became part of Project Tiger in 1973. Ranthambore become Natioal Park in 1980. Ranthambore national park spread over an area around 392 sq km and total park area including wildlife sanctuaries is 1334 square kilometer. Ranthambore area leaps by the Chambal River in the south and Banas in the north. Ranthambhore National Park is about 4 hours drive by road and approx 180 km away from Jaipur.

Jungle Safari in Ranthambore National Park is most important appeal and one of the most admired options to spot wildlife movement and applaud beautiful countryside in Ranthambhore Tiger Reserve. Ranthambore Jungle safari offers the tourist a chance to travel around variety of animals resides in the park. Ranthambore is now a great wildlife destination for wildlife lovers and keen wildlife photographers. Ranthambhore tiger safari is a lifetime jungle experience for visitors who explore wildlife in front of his eyes. 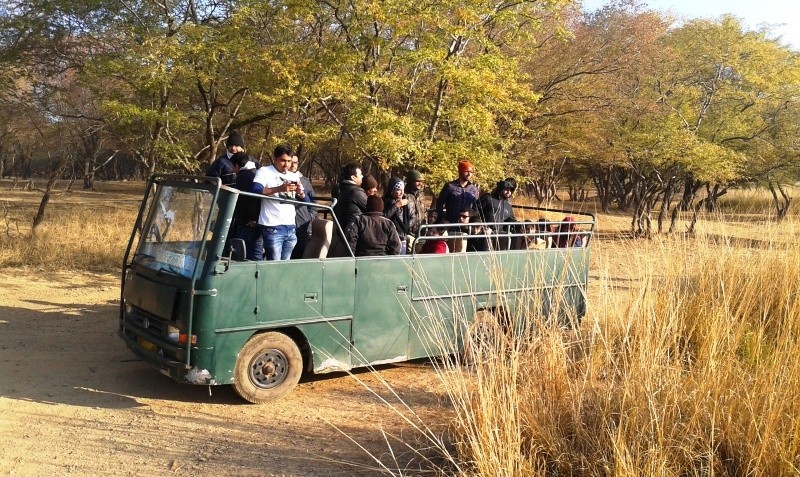 Ranthambore safari is organized two times in a day by forest department from October to June and rest three month July to September few safari zones of Ranthambore Tiger Reserve remains closed due to rainy season for tourist activities but other safari zone that is route 6 to 10 remains open throughout the year and in monsoon also. The first safari starts early in the morning and second shift safari we can do after lunch or late afternoon around 2-2.30pm, but Jungle Safari timings in Ranthambore depend on sunrise and sunset timing. There are two type of safari mode in Ranthambore, one is four wheel drive Maruti Gypsy or jeep which is up to six passengers and other is Canter that is open top roof safari bus up to twenty people along for the ride.

Both of which we have comfort and re-fitted and good wildlife viewing. Ranthambhore safari Tour lasts for three and half an hours on your assigned route or zone. There are ten different zones in Ranthambhore Tiger reserve, Both safari vehicles jeep and canter goes on same zones and offer the same prospect for wildlife performance. There are no any bad zones all safari zones are heart of the park. All safari zones in Ranthambore are randomly assigned by the forest Department on the day of safari.

A stunning view of the Ranthambore with camera. Photo courtesy Wasim

Ranthambore’s Sawai Madhopur Railway Station got a...
Conflict Between Mother and Daughter for Empire in...

No comments made yet. Be the first to submit a comment

Wait a minute, while we are rendering the calendar